Take a photo of how you check the weather I check the weather by looking out my front door.

Within a few seconds I know the forecast for the day based on feel and the types of clouds. The type of clouds can act as a barometer of atmospheric pressure.

Sticking my arm out the door gives me an idea on what kind of armor I need during the winter.

Earlier vehicles for the 70’s generally had the lowest miles per gallon and higher acceleration, horsepower. More high horsepower cars were made in the 70s than the 80s. 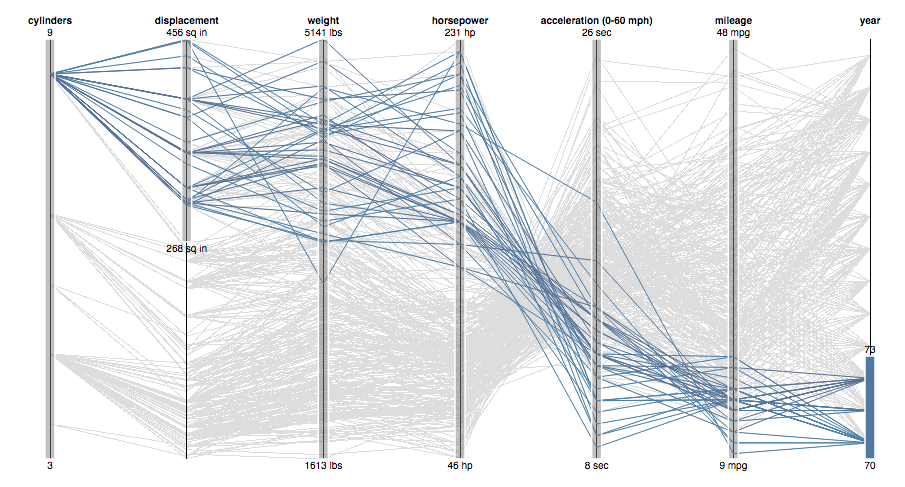 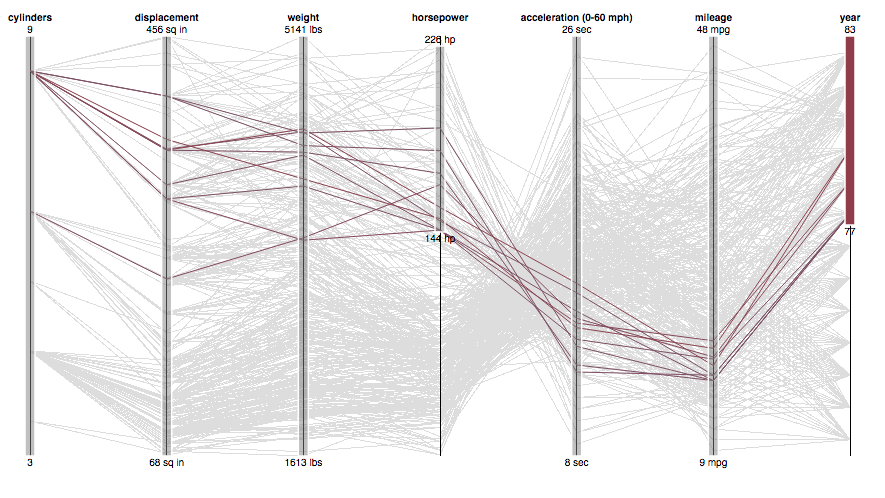 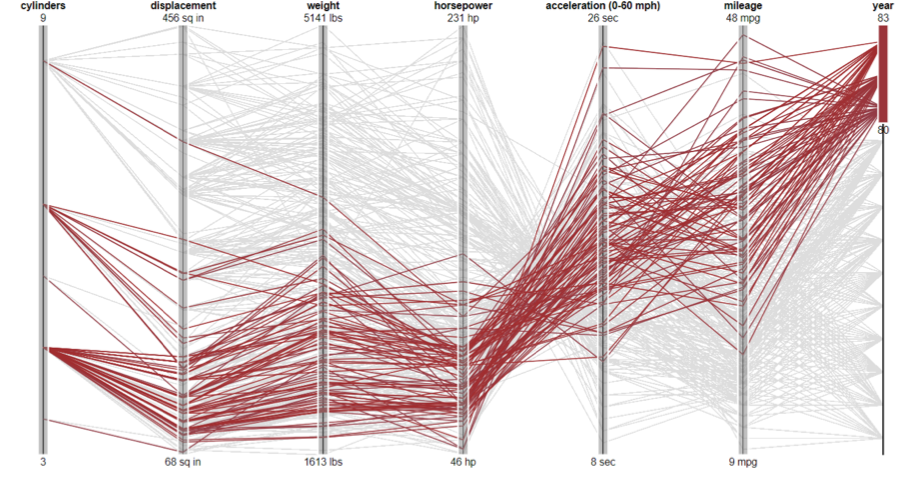 Three slowest cars in dataset were manufactured in the 80s. 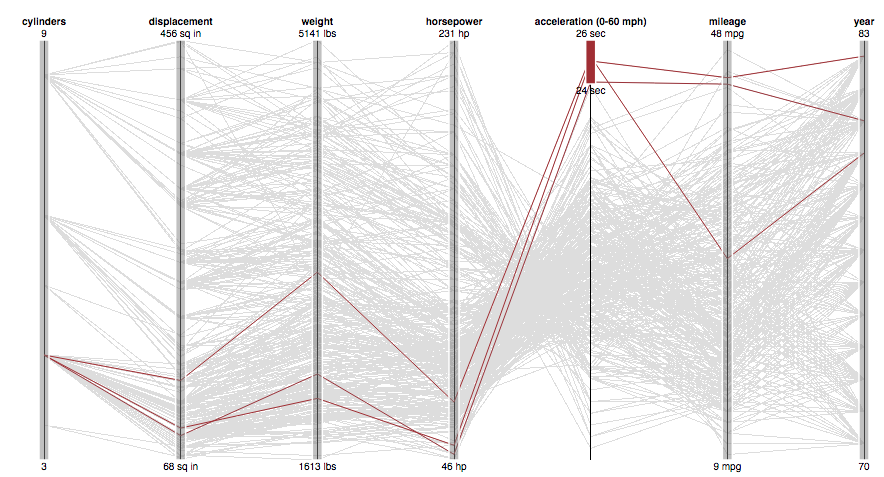 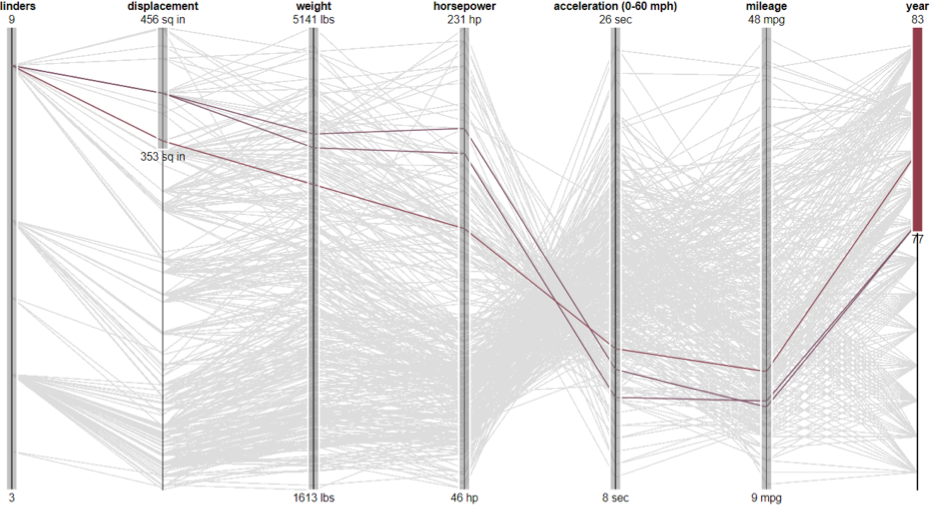 The majority of 8 cylinder cars were made in the 70s. 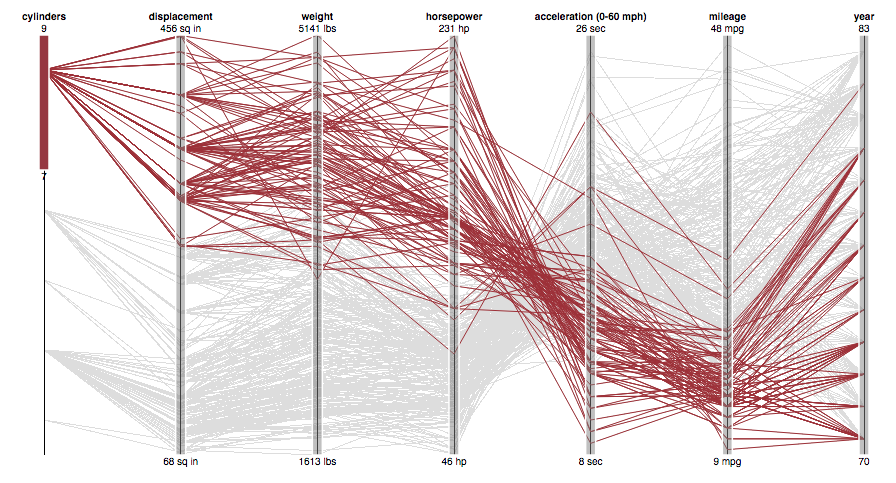 Small cars were made throught 70s and 80s. 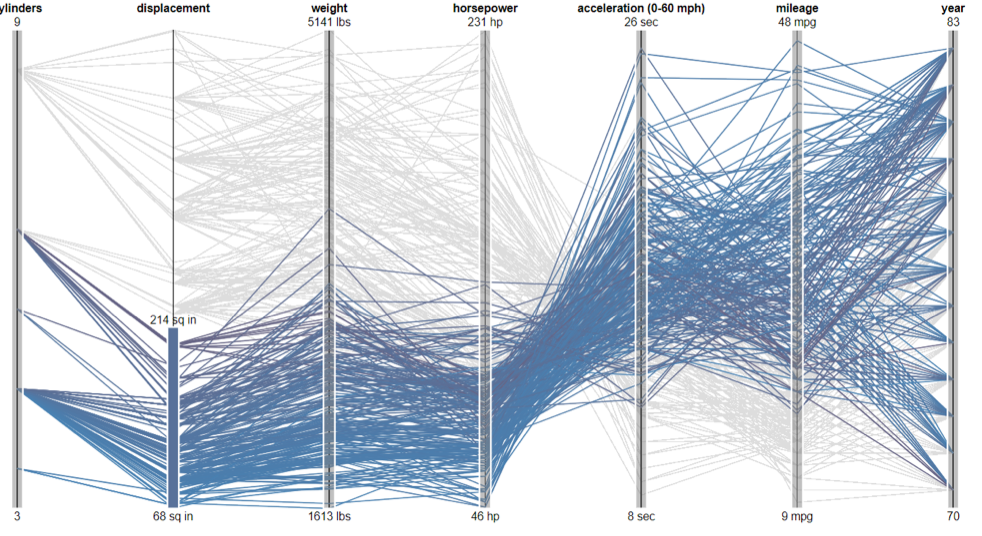 To navigate the data, simple click on the tab for each type of chart. You navigate the death by location maps with click and drag, and mouse wheel to zoom.

Unzip the files and load the R project file.

Most of the data about the age, sex, and time of death did not show any major patterns other than the outbreak starting around September 1st, and a spike in attacks lead to a spike in deaths.

It would be interesting to see if weather data shows a higher than usual temperature during this time, leading to higher water consumption rates.

This visualization is generated based on the Human Development Report (HDR), an annual publication that ranks nations based on Human Development Index (HDI) and it includes 188 nations. This is represented by the six lines on the display: Education, Population, Health, Workplace Equality, CO2 Emissions, Living Standards.

The three primary factors that determine the HDI is Life Expectancy/Health, Education, and Standard of living. The Health component is measured by life expectancy at birth. Education is the mathematical mean of years in school, 25 years is expected from birth for this report. The standard of living is based on gross national income per capita, with consideration taken for the relative importance of income in wealthy locations. Link to full technical notes.

The data is collected from The Human Development Report Office (HDRO). The data is based on regular communications and meetings with the Statistical Advisory Panel, as well as national and international statistical agencies. HDRO also works with the United Nations and World Bank who help provide standardized data. Many of these offices have specialized areas when collecting this data, everything from the percentage of homeless to infant mortality. The methods of collection differ agency to agency, but some common ways are querying government organizations, hospital medical data, public repositories, and onsite reporting. A full set of sources can be found here.

The focus of the report, and this visualization, is to identify which nations put high importance on human development. Being able to view a nation's growth or decline over 30 years in certain sectors is interesting. You can see external impact if you know a nation's history. For example, Bosnia and Herzegovina had a civil war from 1992-1995 with turbulent times until the early 2000s. When using the slider during this period, Bosnia and Herzegovina moves from 154th place in 2000 to 66th by 2005. The lack of previous education data may help explain the leap in world position. 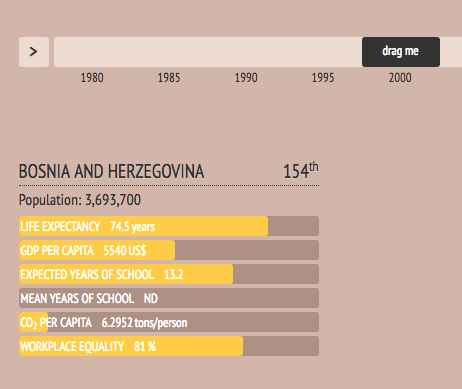 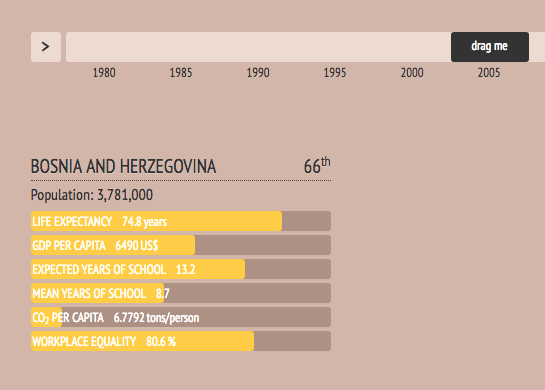 Additionally, Columbia and Argentina both have huge population growth, but Columbia did not increase its CO2 emissions as much. This is likely connected to booming industrial sector with a higher pollution output. 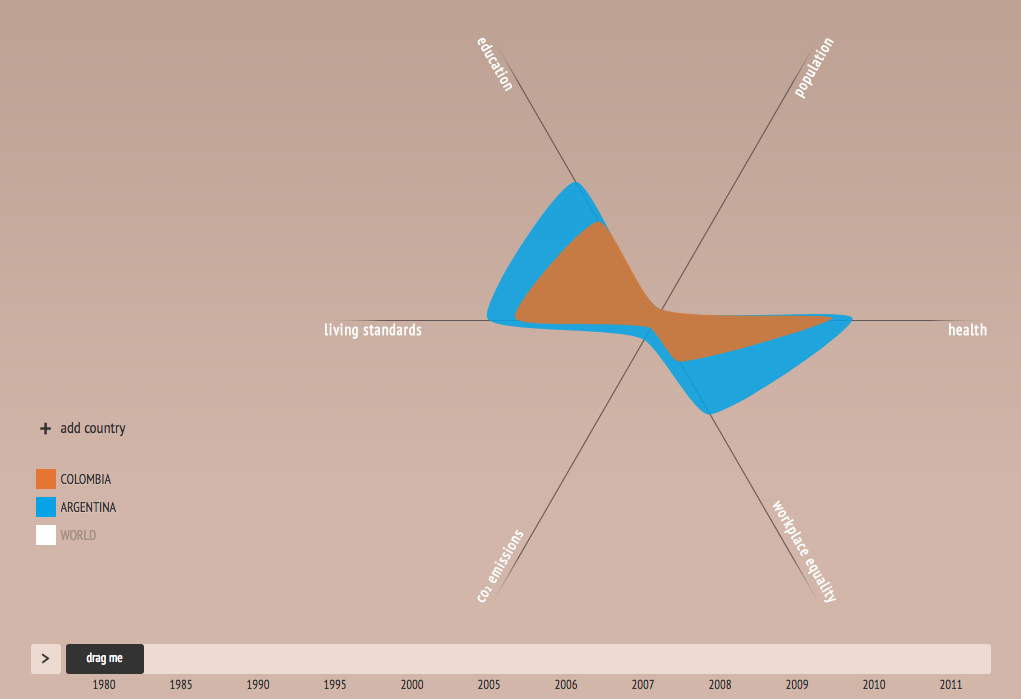 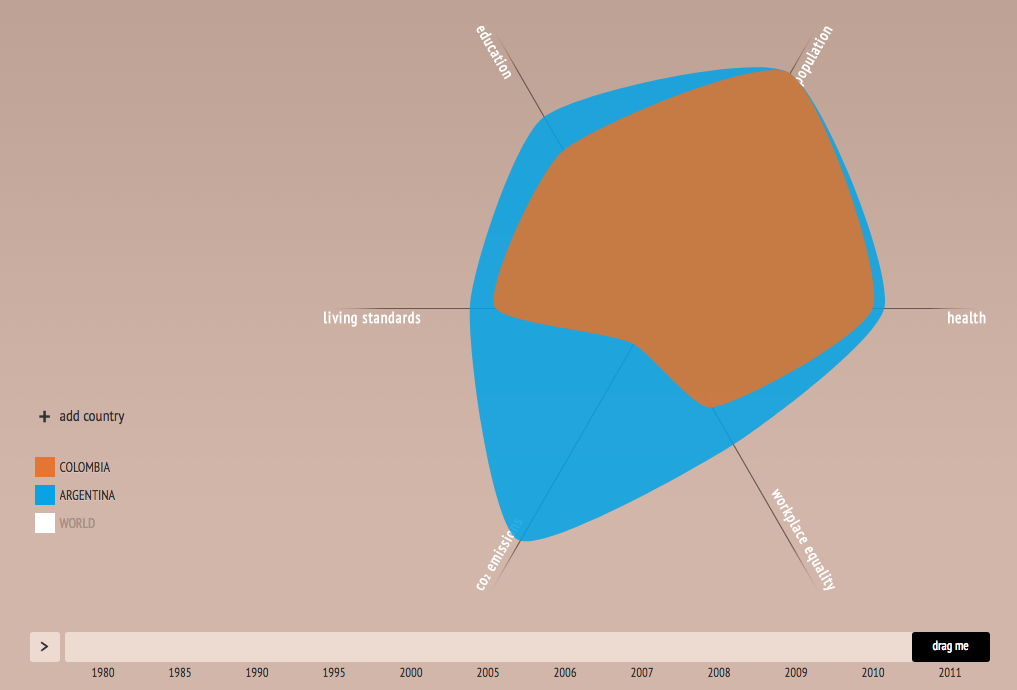 The main question people would ask here is why? Why did some countries grow, while others struggled? Why did some have spikes in education, or quality of life? This visualization would be a lot more interesting if it was able to link to news or be able to display quick points about major events going on in the nation.

The ease of use is one of the highlights, as well as the page simplicity. No scrolling is really required unless you want to see the numbers behind the data. A good feature to add would to allow to hover and view the numbers behind the shape. Right now when hovering over a shape, it only displays the nation's name. This is helpful as the colors have no correlation to the nation.

One major criticism is the color choices, as you cannot alter the random values. This could be tough to read from a color blind perspective. It would also be nice to see which nations are most impacted by missing data, and in what sectors. If data is missing, it is displayed as N/A in the lower portion of the visualization, but no emphasis is given to which data is most commonly missing.

According to the website, there are 188 countries included, however 188th is listed 3 times. To be included in the report a nation must be a United Nations member and be able to provide recent, reliable, and comparable for the three main criteria used, Health, Education, Standard of Living. 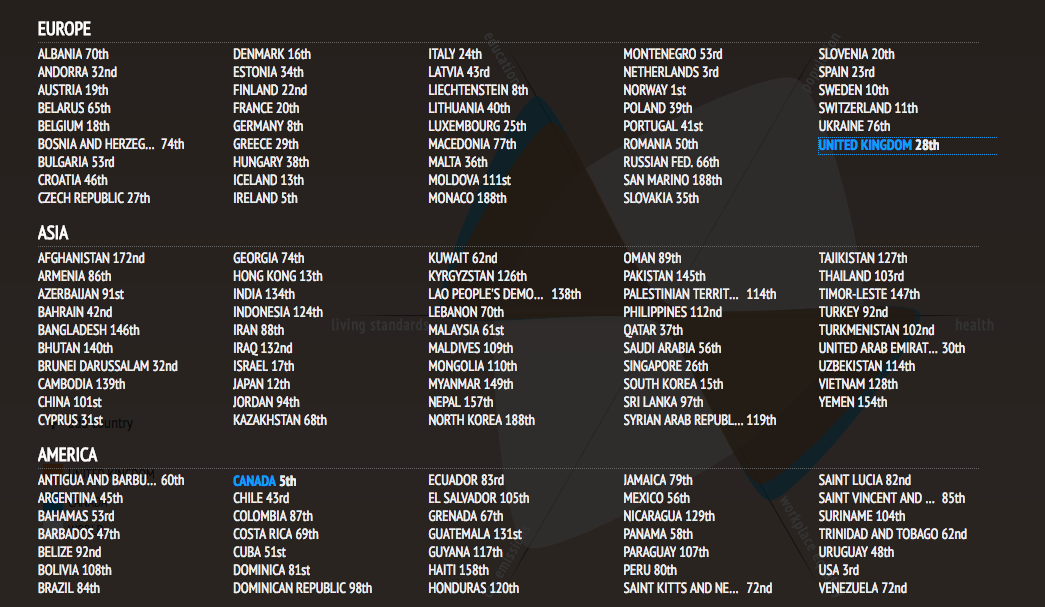 North Korea, Monaco, San Marino are the three nations in last place based on this data.

Many western nations show no major difference, so extremes are the often the most interesting nations to look at over time. Locations with civil, political, or external stress often show the biggest jumps in short periods of time. Also most western nations do not seem to have major growth in CO2 emissions. I assume this is connected to the low CO2 output of nuclear power plants. 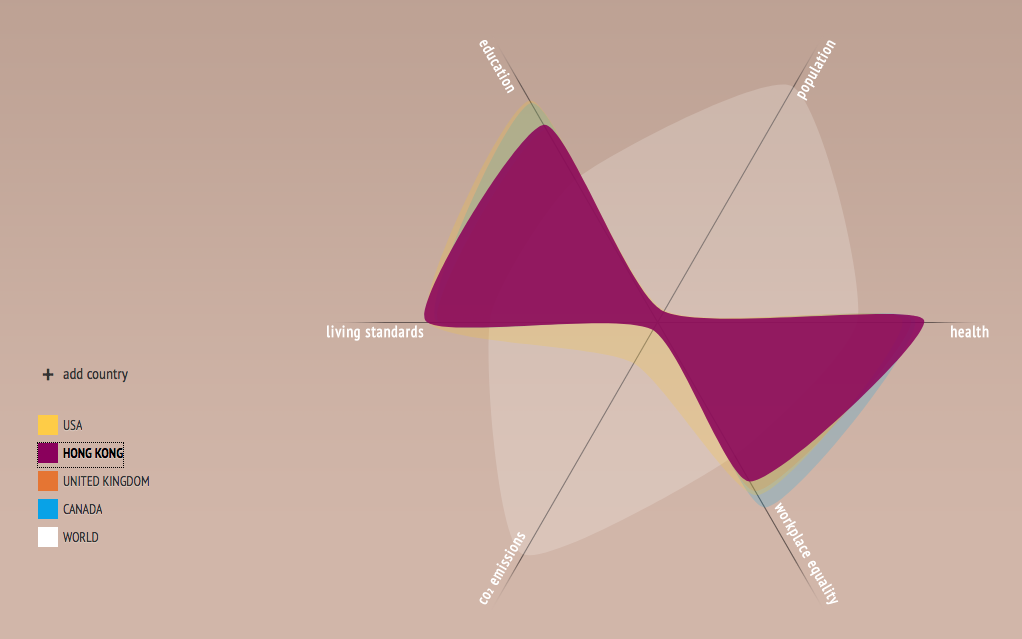 Some nations with lower HDI are often the most fascinating to look at and review. Some show huge leaps in progress in just 20 years. Once again being able to see some key points about what state of the nation would help explain why some changes are so dramatic. 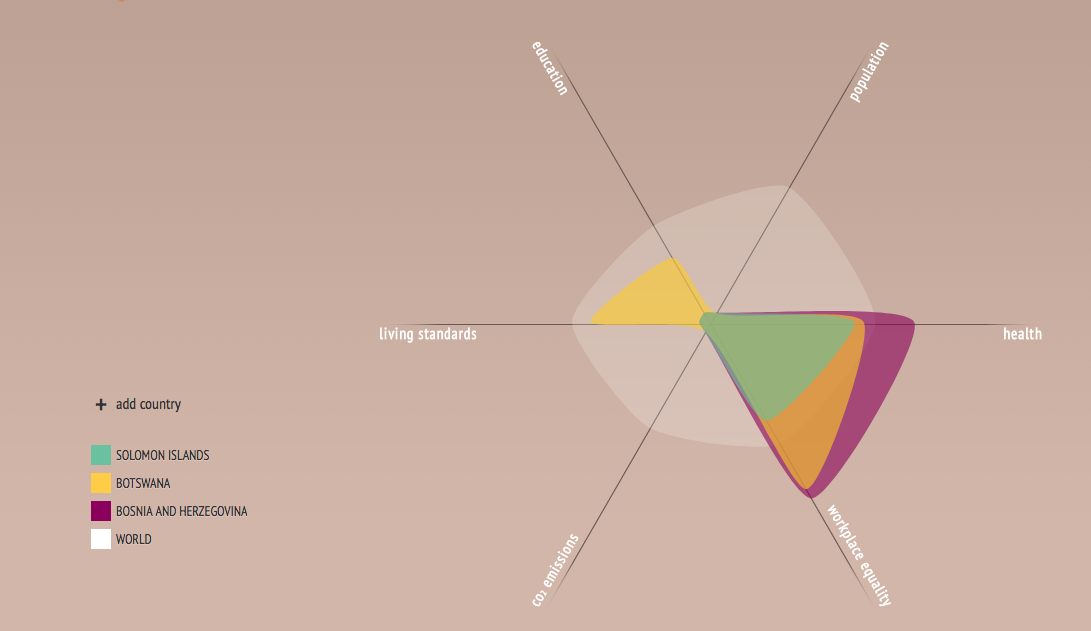 The numbers behind the data are shown in the lower area, and can be changed based on year. 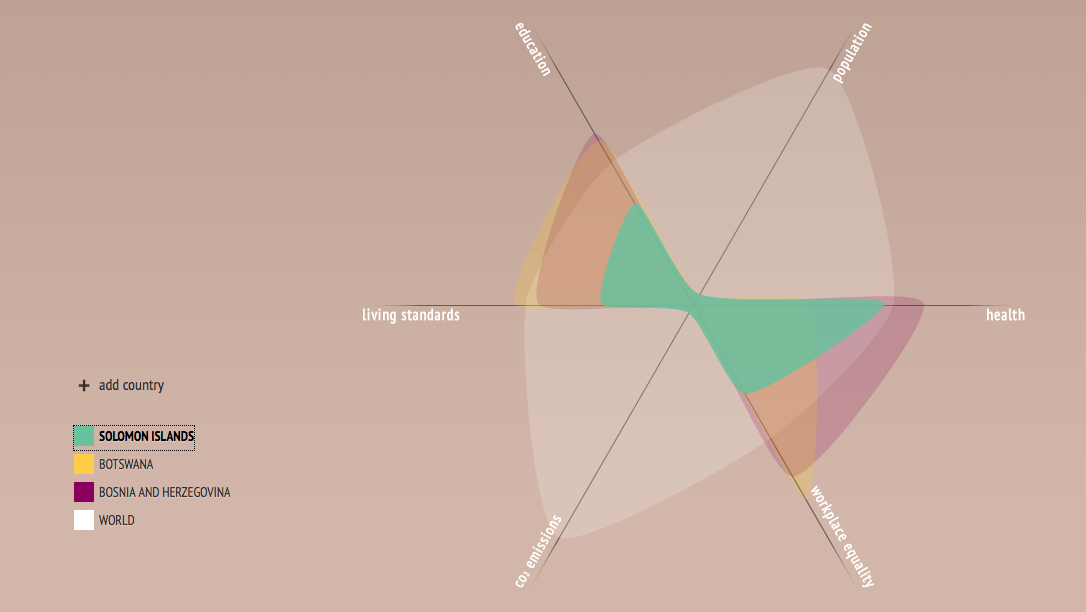 The number one ranked nation, Norway, against a few random nations over time. 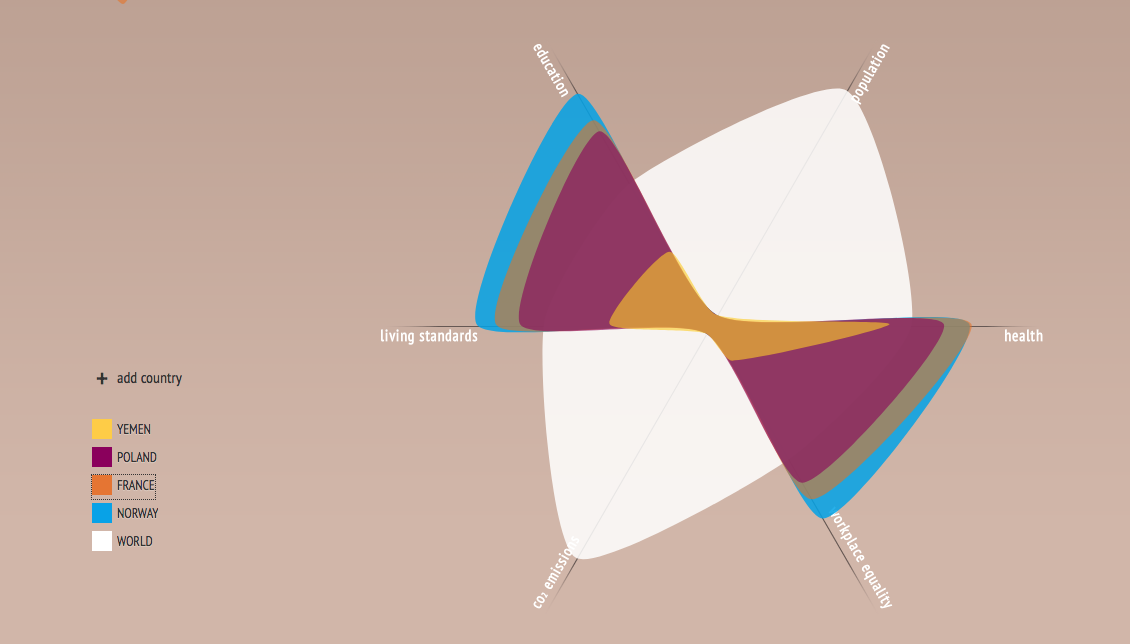 Based on this dataset, 1985 Poland had the same HDI as Yemen. This appears to be an exteme example, which might be connected to access of data as Poland was behind the Iron Curtain until 1989. This can be seen in this visualization as Poland moves from the living standards of a war-torn country to a normal one in just 5 years (1990-1995). This is one of the samples where understanding why missing data may speak to the bigger picture, or mislead. 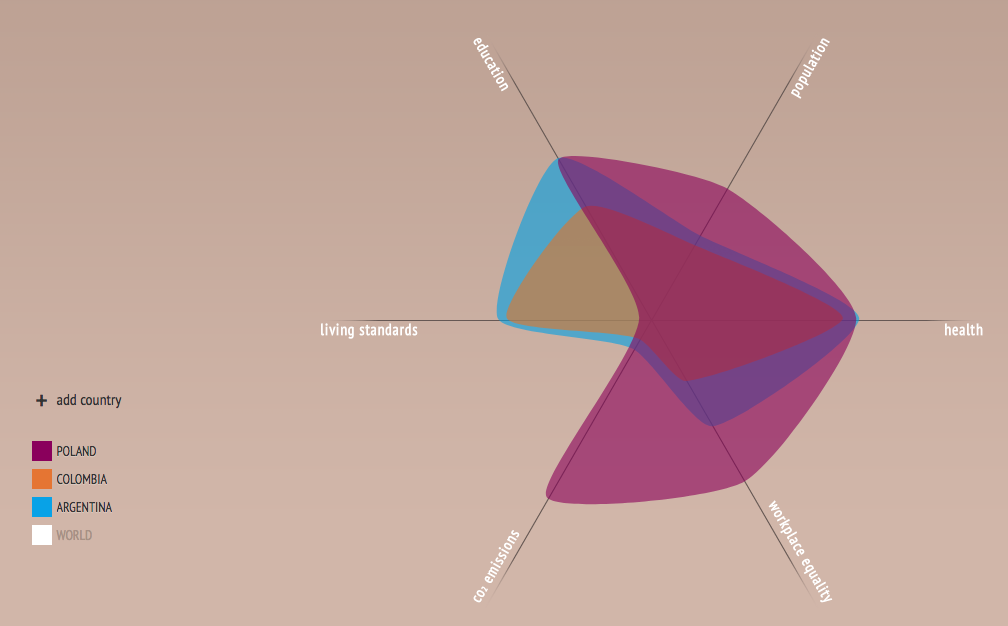 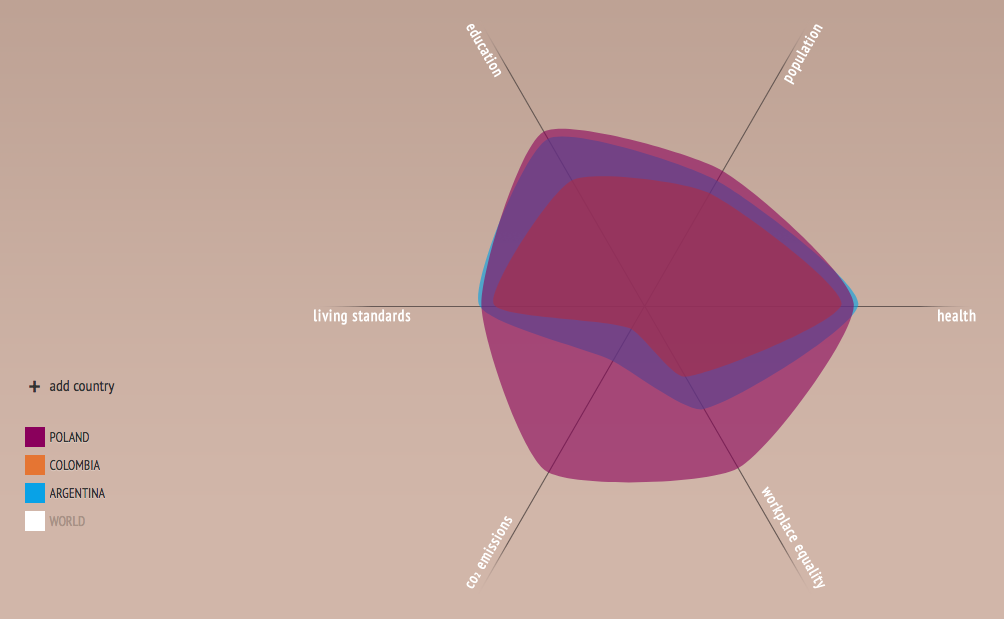